Loi or Loy Krathong Festival – The Festival of lights 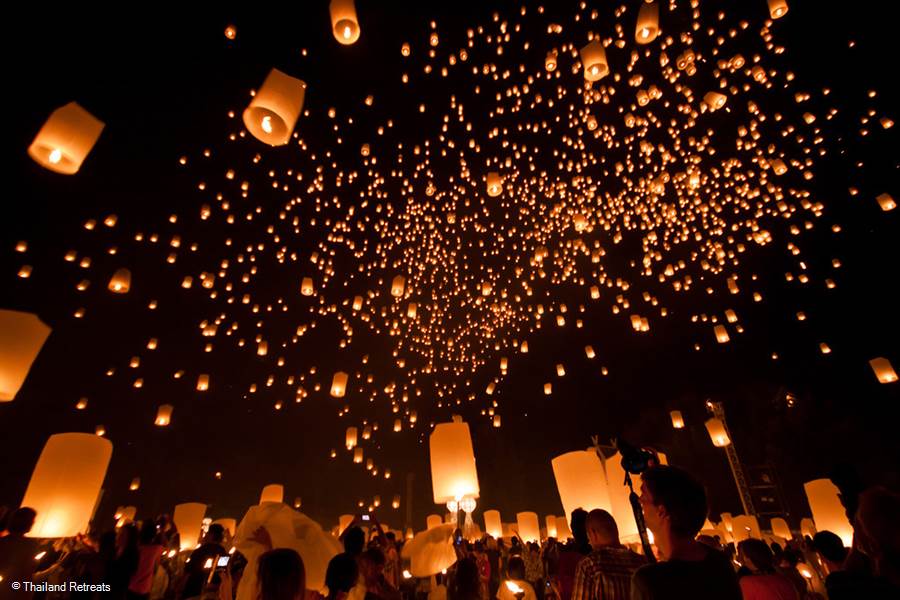 One of the main events in the annual calendar of Thai festivals is Loy Krathong (or Loi Krathong). In 2017, the holiday falls on November 3rd. The festival does have religious and symbolic meaning and years of history. However, it has become a lively, happy and fun occasion - visitors are welcome to join in and celebrate with locals. It is a family friendly festival.

What is it about?

Loi or Loy means ‘to float’ and a Krathong is a decorative float made especially for releasing on to the water. All across Thailand, people visit areas of water together to float their Krathong.

The act of floating the Krathong is traditionally thought to pay respect to the river spirits and give thanks to the ‘goddess of water’. Many Thai’s also believe the act floats away troubles from the previous year, to help you start afresh. The decorative Krathong can be made of banana trunk or bread and banana leaves, beautiful flowers, incense sticks and a candle. You can purchase Krathongs during the festival or make your own. (We wouldn’t recommend buying the Krathongs made of Styrofoam, as these are not biodegradable.)

Many Thai’s clip a lock of hair or nail clipping to add to the Krathong and add money to it, before they float their wishes and prayers for the coming year off along the water. It’s tradition to watch it float away for as long as they can. The further it floats, the more luck you are said to have.

Viewing the congregation of twinkly Krathong lights as they flicker across the water and lanterns as they light up the sky is a beautiful spectacle to behold. Attending the festival will create lasting memories of your holiday – a magical experience for children and grown ups.

Where to go for Loy Krathong:

Some of the grandest celebrations are organised by the Tourism Authority of Thailand and these are held in 7 locations - Nakapirom Park (Bangkok), Sukhothai, Chiang Mai, Tak, Ayutthaya, Samut Songkhram and Ratchaburi.

If you are planning to stay in one of our villas, you may want to find a celebration closer to your holiday accommodation. Your Krathong can be released onto any body of water - river, lake, sea and even hotel swimming pool at a push! Here’s a quick overview of where to go near our luxury villas:

Phuket – in Phuket make your way Patong beach to release your Krathong into the sea or Saphan Hin Park – a recreational seaside park in Phuket town.

Koh Samui – There are several spots across Samui where you can join in the celebrations. Some of the most popular include Chaweng Lake and Wat Plai Laem – close to Big Buddha.

Koh Phangan – The most popular place to celebrate in Koh Phnagan is at Baan Tai pier. There are lots of celebrations with fireworks and beauty contents.

Krabi – There is a traditional celebration at the river bank in Krabi town. At Ao Nang beach, many of the hotels get involved in a parade and the hotels create elaborate Krathongs on the beach.

More recently couples also attend the festival to release their Krathong hoping for luck, love and happiness in their relationship – the length your Krathong floats is said to predict lovers fortunes!

In addition to the water activities, you will also find people releasing beautiful sky lanterns. The floating lantern is lit from below, the owner of the lantern makes a wish before letting it float away.


No related articles were found.