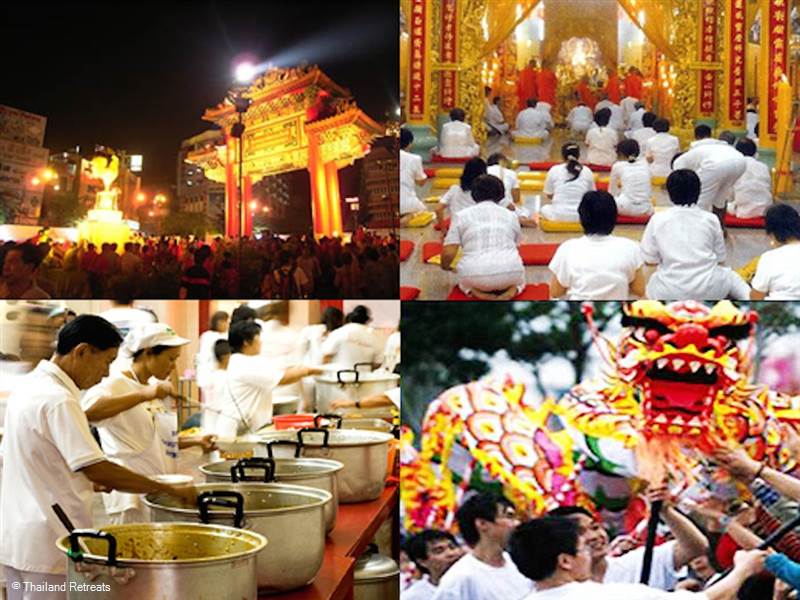 During this Vegetarian Festival celebrated in October, many locals abstain from eating meat for up to 9 days. It is believed that the festival and its rituals bestow good fortune on those who religiously observe it. The festival is not as peaceful as it initially sounds. Alongside the papaya and eggplant there is the little matter of self-mutilation to deal with!

It's certainly not a festival to be observed by the faint hearted or those who go weak at the site of blood. The festival is marked by processions throughout the region at Chinese temples and shrines. It is said that gods enter the bodies of 'devotees' during the festival enabling them to manifest supernatural powers and perform self-torture. During these processions and rituals devotees perform acts such as cutting, striking or piercing their body parts with swords and other paraphernalia, walking barefoot across hot coals and climbing bladed ladders.

One of the main centres for the Vegetarian Festival is in Phuket at Kathu village shrine outside Phuket town. The festival is steeped in history and this is said to be where the festival originated. You will find local people respecting the ceremony dressed all in white.

Abstaining from meat and alcohol during this time is said to make participants strong in mind and body and if you wish to find lots of good vegetarian food during this time head to Phuket town. A large proportion of the population is Thai-Chinese and many of the restaurants in town change their menus during the festival and there is an abundance of street food stalls.

One of the highlights of the festival is the dragon procession. Rites are performed at more than ten temples at various times and dates. Keep up to date with plans for the 2016 festival at http://www.tourismthailand.org/.

The Phuket Vegetarian Festival is exotic, colourful, entertaining and just a little bit scary. If you attend this peculiar event you'll have some amazing photo opportunities and lasting memories of the Thai Chinese culture. If you want to continue to enjoy your holiday in the usual way without attending you can. Most of the activities are away from the main tourist beach areas.