< Back to Koh Samui Villas
Highlights

The central point of the Big Buddha location is Bang Rak beach and village dominating the coastline and is well known for the hub of boating activity with a number of piers servicing the tour boats for sightseeing the neighbouring islands or snorkelling and diving trips.

Bang Rak village has the usual amenities of banks, pharmacies and convenience stores servicing the many expats who have settled in the area

Map of villas in Big Buddha

View our full list of villas in Big Buddha

Big Buddha area is located in the north east of Koh Samui between the areas of Bophut to the west and Plai Laem to the east. The village that runs parallel to the beach retains the name of Bang Rak which translates to “Village of Love”.

Big Buddha area is located in the north east of Koh Samui between the areas of Bophut to the west and Plai Laem to the east.

The golden 12m high statue of Big Buddha, one of the top tourist spots of Koh Samui, majestically sits on it’s own island at the east end of the beach and has now given it’s name to the beach formerly known as Bang Rak beach.

The village that runs parallel to the beach retains the name of Bang Rak which translates to “Village of Love”. When the sun goes down the statue is floodlit and can be seen several kilometers away and acts like a great guardian of the island, an impressive sight, especially from the air as the planes arrive and depart.

Remaining at the east end of the beach there are now quite a few piers which mostly serve tourist speed boat day/diving/scuba trips to the Angthong Marine Park and other surrounding islands and a ferry to Koh Phangan where once a month the famous Full Moon Party takes place.

This east end by Big Buddha is also home to a busy market where locals flock at certain times during the day as the fisherman arrive with their fresh catch of the day.

Several visiting luxury vessels as well as the colourful fishing boats moor in the area, creating an interesting view against the backdrop of the island Koh Phangan, none of which interfere with the relaxed feel of this beautiful beach.

Apart from the east end with the hustle and bustle of the ferries and surrounding cafes & sports bars, the village is generally considered quiet due to the lack of large hotels. It has a lot to offer as well as a beautiful beach with an abundance of restaurants serving both Thai and International cuisine.

In previous years, budget beach bungalow resorts ideal for the backpacker lined the beach, but more recently, with the increase in the number of ex-pats making the area their new or second home there are many new eateries and convenience stores on both sides of the main street.

Bang Rak Beach (also known as Big Buddha beach)
Avoiding the busy east end of the beach where the boats are much of this 3km long beach towards the centre of the bay is idyllic. White sands are bordered by swaying palm trees, the calm waters giving all year round swimming, safe for young families. Beach vendors make a rare appearance.
It is here that we have a few of our Koh Samui luxury villas, which benefit from a quiet beach and stunning views in front of the villas and a bustling village behind.

Along the western section of the beach through to the headland that marks the beginning of Bophut Beach, the sea can retreat considerably at low tide at certain times of the year, creating mud flats. Locals harvest shellfish early in the morning at low tide, and fishermen wade out to a large sand bank to fish. It is not uncommon to see water buffalo being walked along the beach, or even taking a cooling dip in the sea. 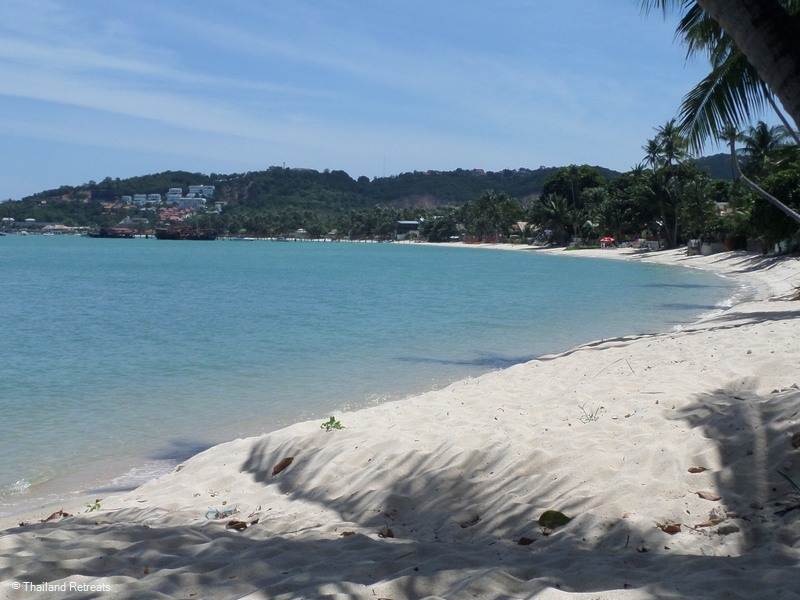 North East – At one time known as the ‘Residents’ beach as many of the expats have settled in this area on arrival. There is a hive of water activity as the main tourist piers to Koh Tao and Koh Phangan are located on this beach. Soft white sand and a great swimming beach all year round
Activities

There are lots of things to do in Big Buddha. It's famously home to the Wat Phra Yai temple encompassing the breathtaking Big Buddha statue.  You will find many watersports on the beach and it's also well located for diving and snorkelling trips.

Wat Phra Yai Temple
This temple is a top tourist attraction in Koh Samui that encompasses the Big Buddha statue and is surrounded by several small shops selling various typical items for the tourist. It should be remembered however that it is a spiritual place as Buddhism is entwined with local life, and to dress respectively and remove your shoes when climbing the steps up to the Buddha. Towards the entrance to the temple grounds are a few cafes and smoothie/juice bars where you can sit and enjoy the views right across to the bay and Koh Phangan.

Fresh Produce Market
This market is located just outside the temple and sells mainly fresh fish and other seafood as well as fruits, herbs and spices. Locals and hoteliers get their fresh produce early in the morning as the fisherman come in.

Diving and Snorkelling Trips
There are many diving shops in Ban Rak, close to the piers from which diving/scuba diving/fishing trips depart.
100 Degrees East is one particular Padi Dive Centre and BSAC Resort Centre, which is a reputable company offering snorkelling and diving trips for all ages. They will take you to the best and most picturesque dive spots on the surrounding islands of Koh Samui. With just a maximum of 12 persons on the trip it is ideal for groups of friends or family to have the boat all to yourself.

Watersport Activities
Saard’s Watersport Centre is located next to the largest of the piers and offers windsurfing by the half or full day , laser, water ski and banana boat rides as well as a dedicated 2 day surfing course. This reputable company also has both sail boats (catamaran) and motor boats available for charter or tours.

Tennis
The Koh Samui Tennis Club is located in Bang Rak village just off the main road through the village and is open to everyone with professional courts and coaches available. 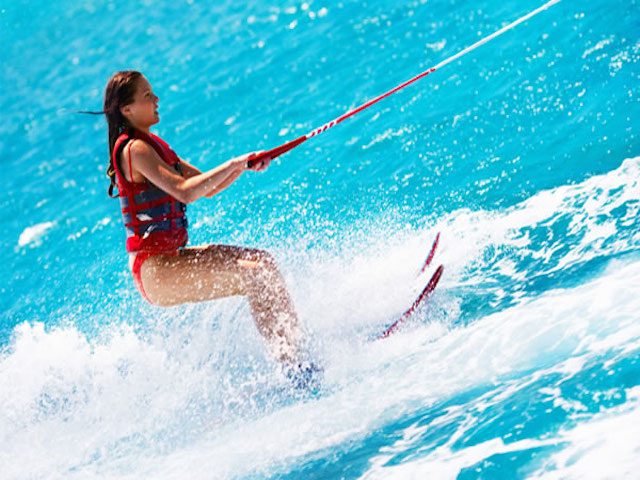 The busier beaches of Chaweng and Lamai will have speed boats offering the traditional water ski trips and lessons and some will also offer wakeboarding, paragliding and banana boat rides. 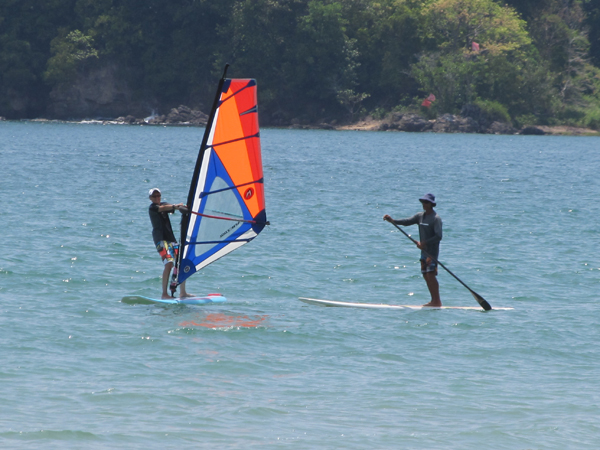 Windsurfing and Paddleboard rental is available on Lamai beach as well as lessons for both kiddies and adults. Maenam beach also a windsurfing facility as well as other sail boats. 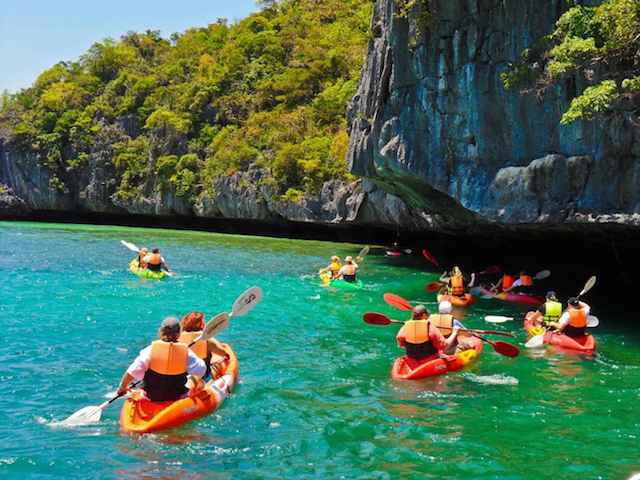 Kayaks can be hired on most of the beaches around Koh Samui either through hotels or concessions for paddling around locally. 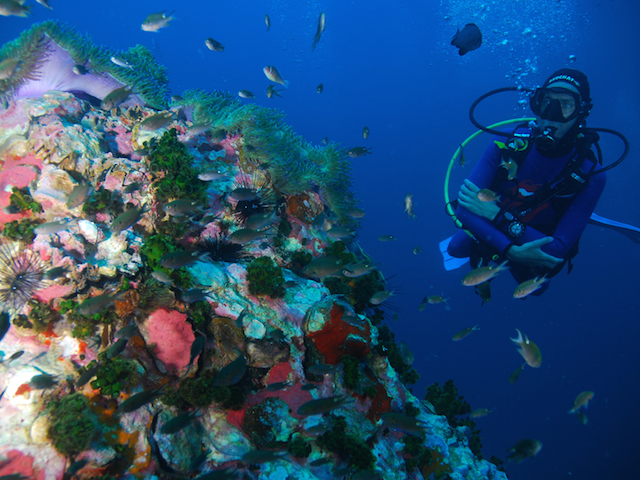 Koh Samui does not have much in the way of coral and therefore very little marine life. Many dive companies operate diving and snorkeling trips to other dive sites as well as PADI dive courses. 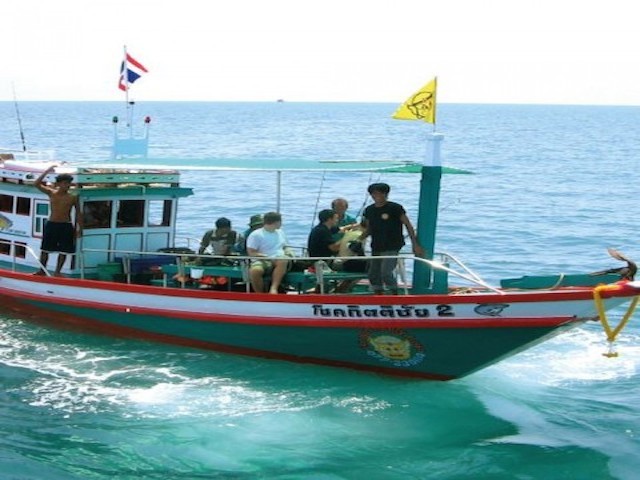 The waters surrounding Koh Samui are teaming with fish and there are many day or night-time game fishing tours available, catering for beginners and experts with all equipment provided. 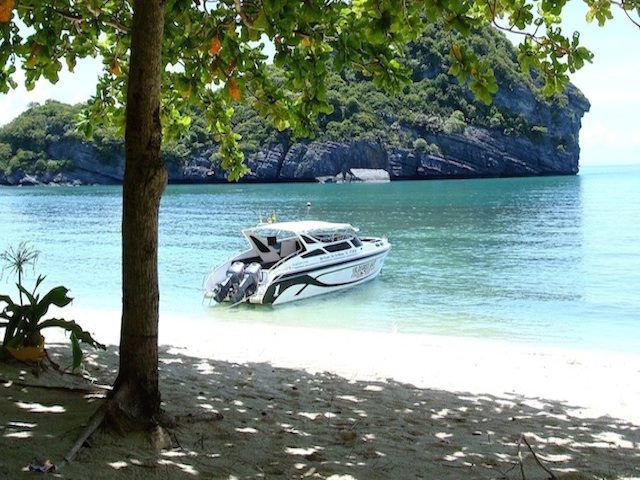 One of the most popular is to the stunning islands of the Angthong National Marine Park Optional snorkelling and kayaking is usually available with equipment provided and lunch. A private speedboat trip around Koh Samui's coast exploring secret beaches is another option. 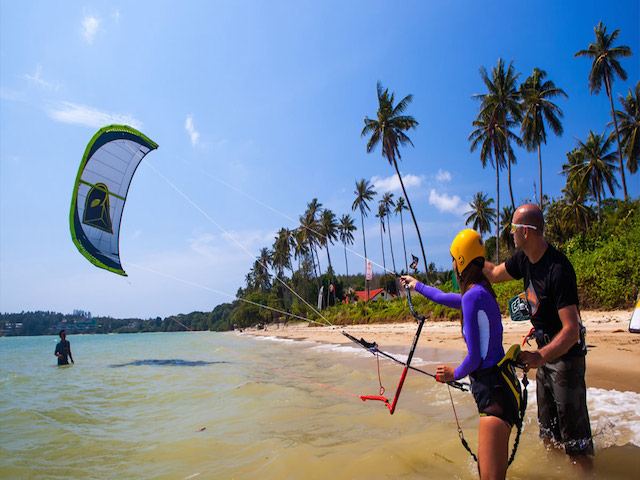 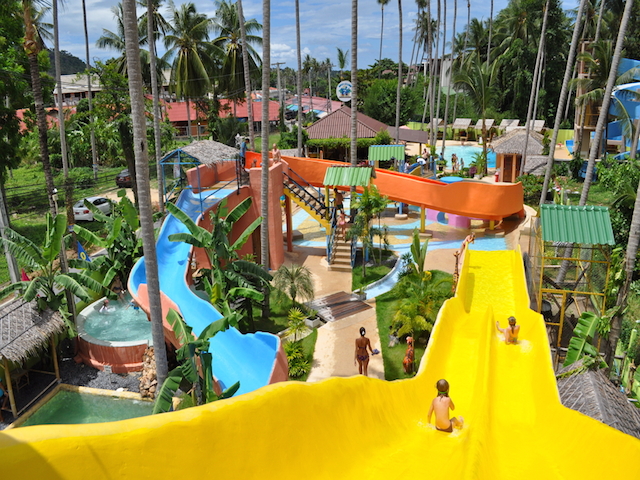 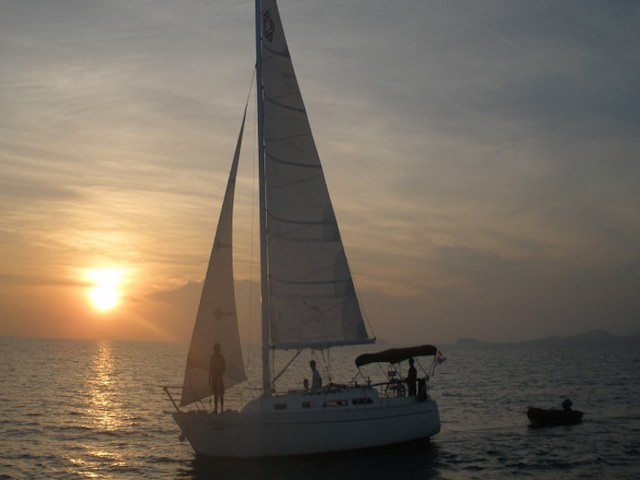 A great way to see the coastline of Koh Samui for a few hours or have an overnight stay visiting other islands is to charter a sailing boat. Different size boats all for a romantic sunset cruise for two or to have fun with a large group of family or friends. 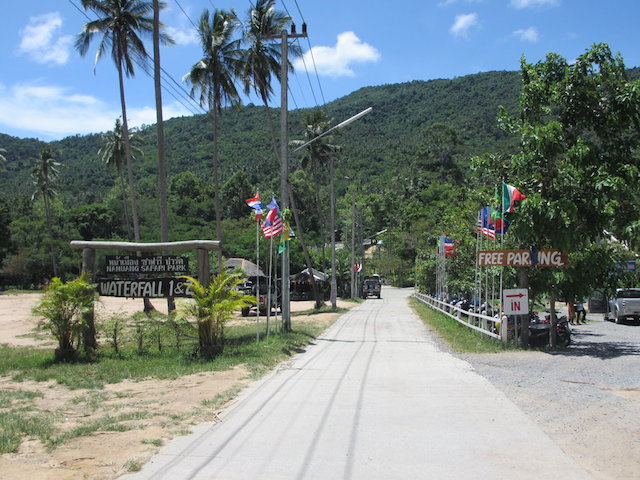 Tours include 20min ATV Quad bikes fun , elephant trekking and show and a cable ride which includes one ride for 6 - 11yearolds. 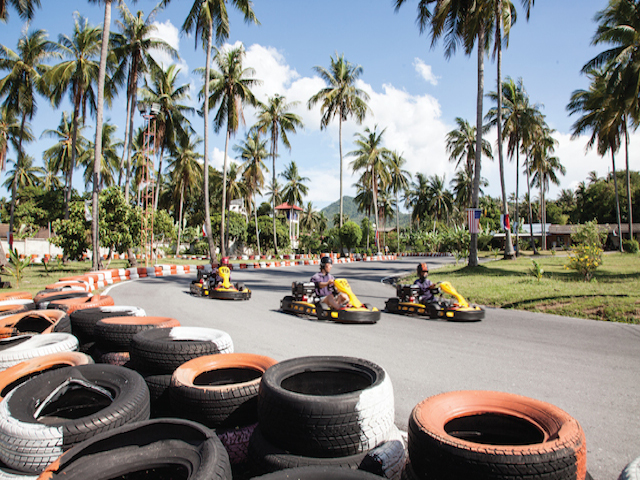 There are three Go Kart tracks now on Koh Samui and provides a fun time for all the family. There are both single and double karts should you wish to drive wth younger kids. 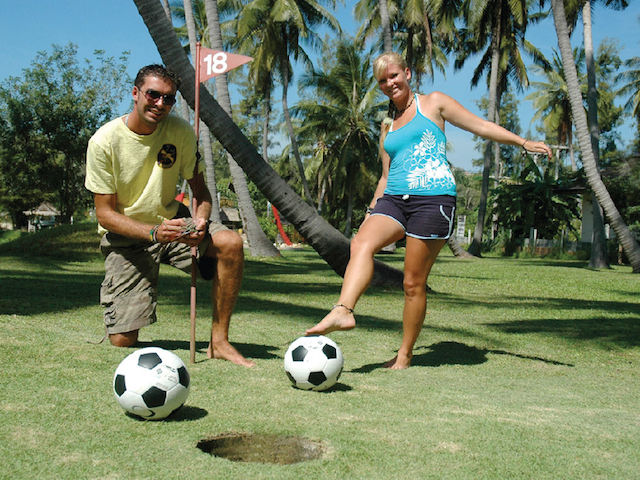 Get family and friends playing, laughing and enjoying this fun game of kicking the football into 18 holes on a tropical course with a cold drink provided. 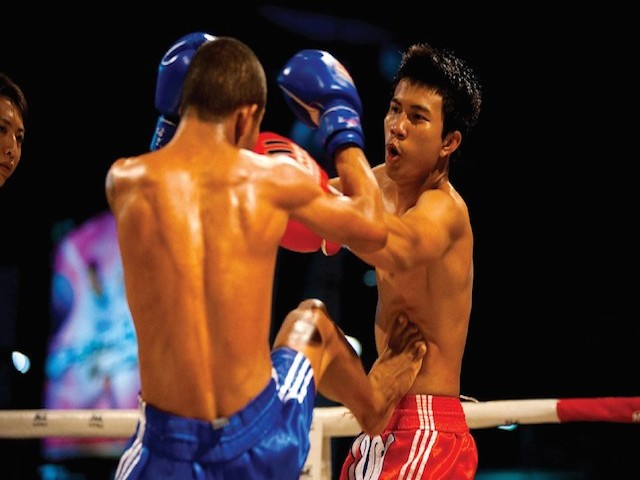 The national sport of Thailand with venues to spectate or partake in professional Muay Thai are found in Chaweng and Lamai. 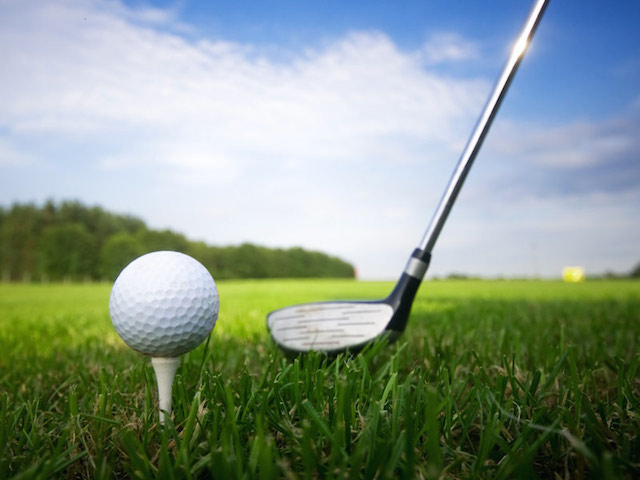 There is a PGA International championship 18 hole par 72 golf course and two 9 hole courses all with stunning views. There are also two driving ranges. 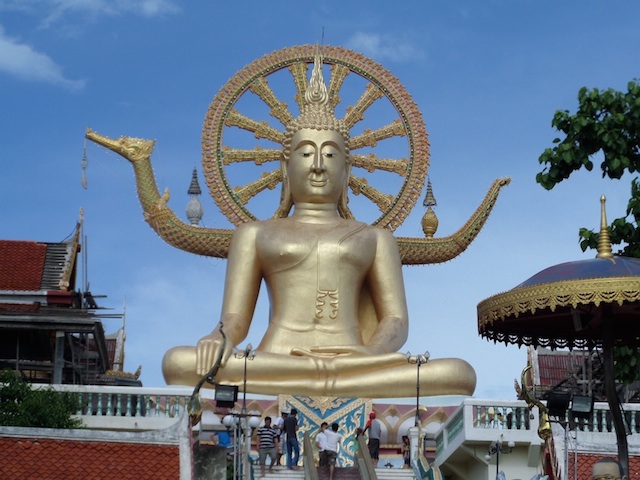 There are many temples in and around Koh Samui representing the history and the different cultures of the Thai residents all well worth a visit some of which have amazing views. 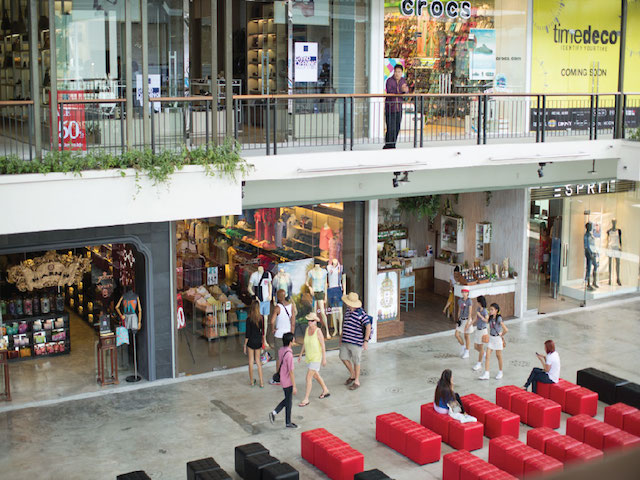 There is ample souvenir and fashion shopping in the popular coastal towns with Koh Samui’s biggest shopping "mall" Central Festival located right in the centre of Chaweng. There are also the "Walking Street" markets in different places every night of the week 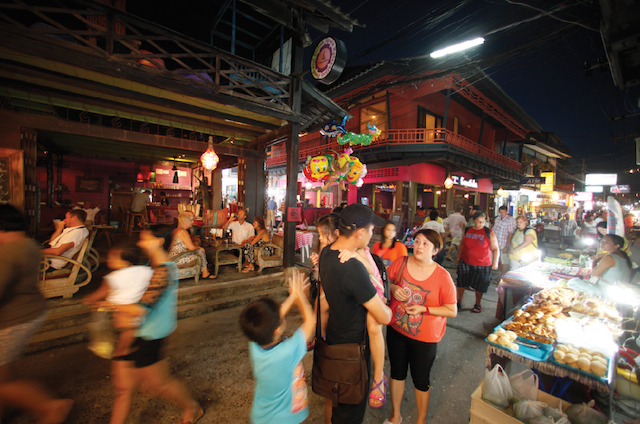 There is a "walking Street" market in one of the towns and villages on everyday of the week - the most popular being the "Od Fisheman's Village" at Bophut which takes place on a Friday night from around 4pm until 10 - 11pm. 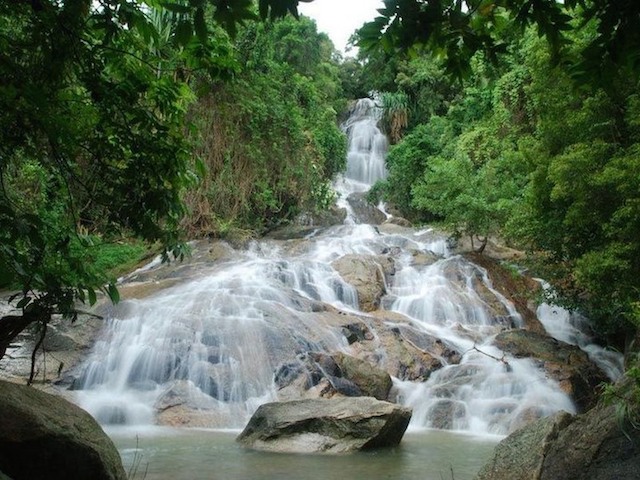 Enjoy an exhilarating trip on the back of a jeep through Koh Samui's jungle and across rivers reaching the highest point on the island experiencing amazing view. 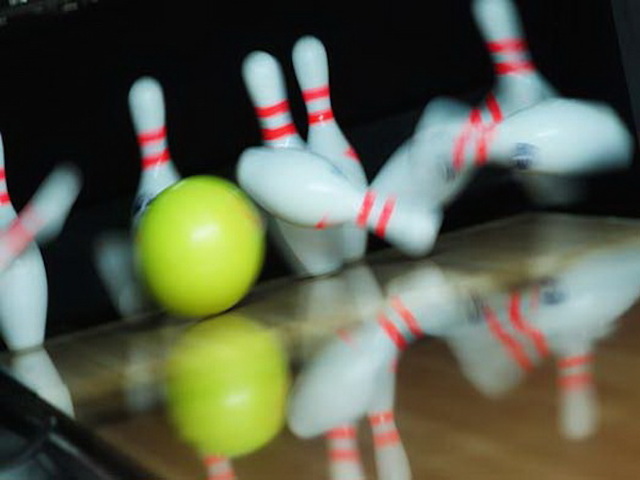 There is just one cinema at the present time located at the Tesco Lotus Supermarket and shopping mall alongside a small bowling alley. Another bowling alley is located in the centre of Chaweng. 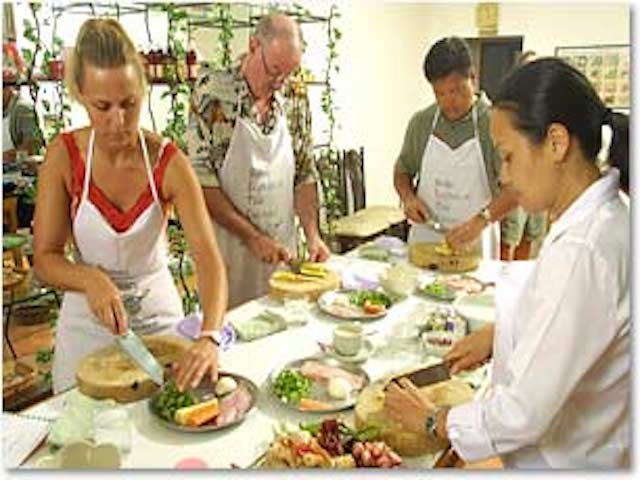 SITCA is the original Thai cookery school on Koh Samui based in Chaweng and has both morning and afternoon sessions to learn all about the ingredients and preparation. The manager of your luxury Koh Samui villa will be able to assist with recommending other cookery schools nearby.
Dining Out

Eating out in Big Buddha

There is an ample choice of restaurants in this area ranging from fine dining beachfront to an abundance of good value laid back eateries.

These are a few of our favourites

Restaurante Antica Locanda
Situated towards the west end of the village, has an Italian kitchen and is one of the best on the island for value. It is frequented by returning visitors to Koh Samui and long term local residents.

Secret Garden.
A popular venue on a Sunday late afternoon, going through the evening serving a buffet BBQ. The Secret Garden is a bungalow resort and restaurant located on the beach, where the diners are entertained by live music from both resident and visiting bands and performers. A great evening in a beautiful setting. In high season tables need to be reserved. Popular for an all day breakfast or lunch and enjoying the boating activity from the poers nearby.

Nightlife in this area is a cluster of hostess bars located at one end of the village next to the new Seatran Discovery ferry pier, which is frequented mostly by the ex-pats enjoying a lively drink with friends.

Our luxury beachfront villas are located in the central and west end of the beach and are not affected by any noisy bars at night.

There are a number of sports bars in the village, all have large screens showing current events that are popular with the residents, locals and tourists staying in the area. The M&M Bar (opposite the Secret Garden ) has live music on a Friday night, where many expats socialise.

View All Our Villas In Big Buddha